Believe it or not, the holidays are upon us. And after that? The 2016 seed catalogs arrive!! (I know, I know – I haven’t even cleaned up the mess that was my 2015 garden, and I’m already dreaming of spring planting.) Anyway, while perusing the Facebook posts of Baker Creek Heirloom Seed company, I found an article about 800-year-old squash seeds that were planted – and grew! And that made me think about the date palm growing in Israel that came from a 2,000-year-old seed. Thus, this post was born.

During an archaeological dig in Wisconsin, scientists unearthed a clay jar that contained squash seeds which were 800 years old. The variety became extinct centuries ago. The seeds were distributed to several Native American communities as well as to some Canadian students. The students planted the seed and grew squash!

Winona LaDuke, a Native leader, named this huge squash Gete Okosomin, which means “big old squash.” Seeds will be saved and replanted in order to revive this ancient variety and allow farmers and gardeners to grow it once again.

If this variety would grow in my climate zone, I would love to plant this as soon as seeds are available to the public. I bet it tastes delicious!

In the spring, I read about a Judean date palm that had grown from a 2,000-year-old seed found at Masada. The male seed was sprouted in 2005 and is now growing strongly in Israel. At ten years old, it is ten feet tall, has off shoots, and grew flowers with pollen this year. 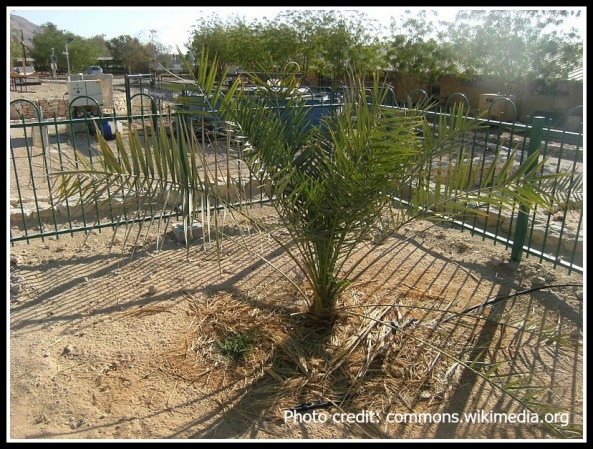 Scientists took the pollen from Methuseleh and pollinated the flowers from a wild (modern) female date palm. The pollen was good, and the tree bore dates!

Israeli scientists are continuing to germinate and grow the seed found at Masada. At the current time, there are at least two female date palms growing. The goal is to develop enough mature adults, both male and female, to plant an entire grove of ancient date palms, reviving a variety of date that hasn’t been tasted in two millenia!

Stories like these excite me because plants like these are grown from the ultimate heirloom seed. If you had the opportunity, would you try growing seed that was hundreds or thousands of years old? I would!