Good morning, everyone! By now, I’m sure you have seen our fair city – and state – on every news channel because of the torrential rains and flooding we have had – and are still experiencing in many areas. It’s been one long stretch of weather, let me tell you! Well, you’ve seen the newscasts and the internet photos. Today, I’ll share with you how the storm affected me and my homestead.

Last Thursday was my last day at work before the worst of the storm arrived. I work in downtown Charleston, which is basically a filled-in swamp that floods at normal high tides without rain. I worked late that evening – not only because I had work to get done, but also because I couldn’t leave the building until the tidal flooding had receded some. The rains began Wednesday afternoon, and we were under that Super Moon. Here’s what the street looked like from my perch on the sixth floor of my office building.

By that evening, the forecast was calling for very nasty weather to begin on Friday afternoon. All the schools in three counties, as well as all the universities (I work at one), were closed on Friday. Yeah! Day off, right? It was the beginning of the deluge.

By Friday afternoon, my homestead had already received 4.1 inches of rain. That was nothing compared to what was to come!

Friday, October 2, began like a normal rainy day. While checking my rain gauge on Friday morning for Thursday’s rain total, my Garden Wilson took this picture. The beauty before the storm, a morning glory wrapping itself around my cast iron basket on the table in my garden. 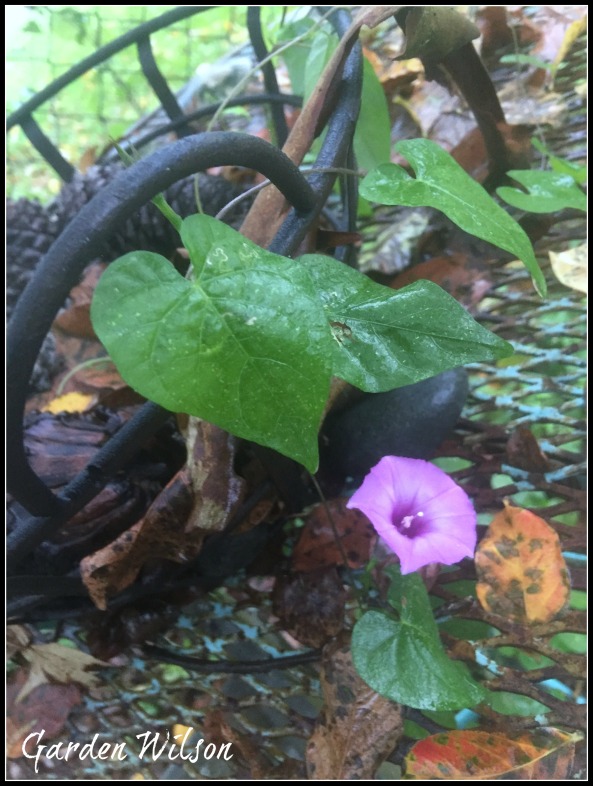 By Friday afternoon, the deluge had begun! Squalls of torrential downpours came one after another! My weather radio had quite the workout as flash flood warnings kept being issued one after another. On Friday, I received 5 inches of rain.

But there was more to come. Between squalls on Saturday afternoon, I got a couple pictures of my very soggy yard. Thankfully, there was no flooding around my area – yet.

My herbs were drowning in the puddles along my front walkway.

Puddles drowning the herbs along my front walkway on Saturday, Oct 3, 2015

It rained all day on Saturday, and then the wind arrived. I was so concerned that the large trees in my yard would be uprooted by the slightest wind because of how waterlogged the ground was.

By Saturday afternoon, Hurricane Joaquin was moving past us. Although it was far enough out to sea not to affect us directly, the low pressure system off the South Carolina coast and the hurricane were in a climatic dance that kept the stream of moisture shooting into South Carolina like a fire hose pointed at Charleston.

Here’s a very short video of one of the squalls on Saturday afternoon, taken from the warmth and safety of my house.

By Saturday evening, news reports were getting out (especially via Facebook) of how bad it was getting. Downtown Charleston was under water in many areas and the entire peninsula was closed to all incoming and outgoing traffic. That didn’t surprise me. What did surprise me was the flooding that began to occur closer to home.

I live 20 miles inland from downtown Charleston, and my house is not even in a 500-year flood zone. (One of the house’s charms when I bought it.) So I was very surprised when I learned about flooding occurring in the neighborhood next to mine. A few streets over from mine, there is a culvert with a small bridge running over it. The bridge was washed out, and the area is now a small lake! That made me very nervous.

Right after hearing that, I decided to take another video of the squalls – via the light of the street lamp across the street from my house. It was between 9:30 and 10:00 Saturday night when I took this. You can see the shadows of the rain being swept by the wind underneath the street lamp. (This is how it rained for hours day after day!)

Within minutes of taking that video, I lost electricity. Thankfully, I had just charged my cell phone. (Something niggled at me about that.) So, I had a means of communication, if I needed it.

Sunday morning came (October 4), and between squalls, I emptied the rain gauge. With the measurement I took Saturday afternoon plus what was in there Sunday morning, we got 7.8 inches of rain on Saturday!

Stories of the flooding kept pouring in. (No pun intended.) About two miles down the street from me, the Waffle House was flooded – inside, up to the counter tops! I just learned that it was the only Waffle House in the area to close!

Here’s how it looked yesterday morning, after the flood waters receded some.

Waffle House on Monday, Oct 5, 2015 – AFTER the flood waters had receded some

My electricity came back on early Sunday afternoon. My only loss was the milk that had been in the refrigerator overnight. Oh…and the 30 pounds of ice I had bought to create my own ice box in a large styrofoam cooler. But, I consider myself blessed there.

By the end of Sunday evening, I had received another 2.5 inches of rain. And the flood warnings continued. News of evacuations, flooded homes, myriads of street and bridge closings were piling up. And if you think Charleston got hit bad, I think our capital, Columbia (which is about 90 minutes inland from me), got it even worse.

The storm has now passed. No more rain is expected for a while. All total, my homestead received 19.3 inches of rain from Wednesday afternoon through Sunday night. That is a whopping bit of rain! But I am so thankful that my homestead is fine. The tree roots held, the roof and home are still watertight, my family is safe, my neighbors are fine.

Unfortunately, not everyone can say that. I’ve heard there were several drowning deaths in South Carolina over the weekend. 😦 And we still have many issues. The flood waters remain in many areas. Bridges and roads are beginning to collapse. The rivers are above flood stage and are overflowing their banks. (Charleston is downstream from Columbia, so this may not bode well for us.) Any prayers you can lift up for South Carolina would be greatly appreciated.

I’m supposed to show up for work this morning, but I’m not sure if I’ll be able to get there or not. (I wrote this prior to its posting – and your reading.) Stay tuned to my Facebook page for an update.

Things are looking bleak for many in the area, but we’re a city that pulls together when tragedy strikes. I know that we’re going to be okay.