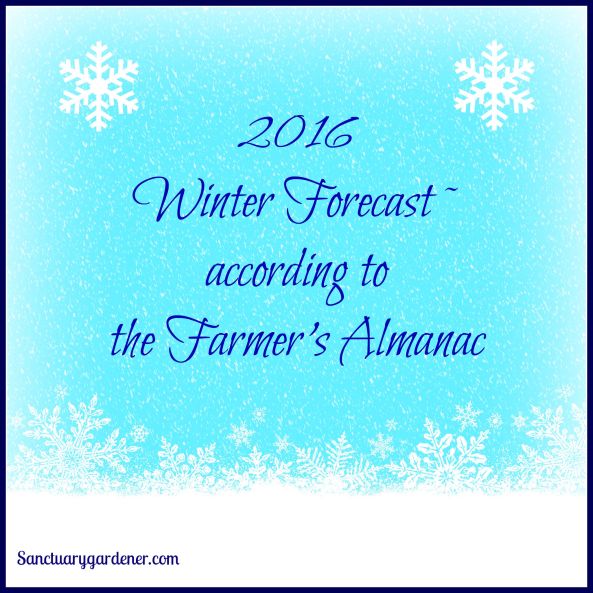 Good morning, everyone. I know, it seems very strange that on the heels of posting about a tropical storm, I’m posting the 2016 winter forecast. Farmer’s Almanac actually released their forecast over a week ago, but I was tied up tracking Tropical Storm Erika. What a crazy time, eh? Anyway, I wanted to share the forecast with you today. It looks like most of the country is in for another repeat of last year’s winter.

Per the Farmer’s Almanac forecast, we’re heading for another cold and snowy winter in the United States. Where will it be unseasonably cold? Sorry, Mom and Dad, but New England will be bitter cold this winter, along with the Mid-Atlantic states (Maryland, Virginia, et al). The Southeast, where I live, will be rather chilly, too – well, chilly for the South, that is. (Of course, for me, that’s not a big deal compared to New England cold!) Texas and the South Central states will have a cool to cold winter, but nothing too extreme; whereas the Southwest will actually experience milder than normal winter temperatures. The only parts of the U.S. that will have normal temperatures are the Pacific Northwest and the Central Plains. (Well, the Central Plains will have unseasonably mild periods with snaps of bitter cold, which then averages out to normal winter temperatures over the course of the season.) 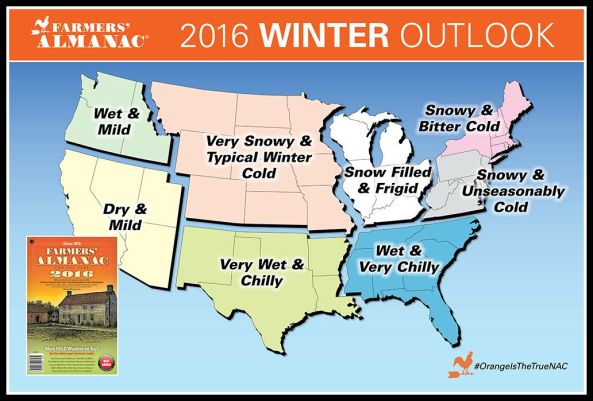 Now for the wet stuff – snow. I know, it became a four-letter word last year. Well, unfortunately, it’ll reach cuss-word status again this year, especially in New England. (So sorry Boston and Rhode Island!) Yep, greater than average snow fall is predicted for New England and the Central Plains. The Mid-Atlantic states will have their share of the white stuff, as well, as they will have a stormy winter with periods of snow fall. The Pacific Northwest, Texas and the South Central Plains, and the Southeast will also have heavier than normal precipitation, but it won’t be cold enough to have snow. (My rain gauge will get a workout this winter, it seems.) The only section of the country that won’t have a good bit of precipitation is where it’s needed the most – California and the Southwest. They will actually have less than normal precipitation. That’s NOT good news.

It’s the first of September, and we have some time before we know if the forecast is on target or not. However, after last year’s winter, I’m willing to bet this year WILL be a repeat performance. So, start stacking up your (dried) firewood, fill your pantries with hot cocoa, pull out the yarn and crochet hooks or knitting needles (to make afghans, of course), and make a list of the books you want to read. It’s going to be a true winter. Oh, and don’t forget the snow shovels, snow blowers, and rock salt. Many of you are going to need them!

For me, winter is still quite a ways off. (Not that we need to prepare for anything like – gasp! – snow.) I know many of you (like my family) are already thinking about the winter ahead. Me? Snow shmo. Right now, my eyes are still on the tropics.