I can happily report that it finally rained this past weekend! First rain in over three weeks. We got 1.5 inches, and even that has made a difference in the garden. You’ll see in today’s pictures how heat and drought stressed my plants have been. At least now, the soil is not so dry. We’re supposed to get more rain today, and I hope the weatherman is right. Meanwhile, my garden is holding on in the continuing heat of summer temperatures, and I’m still unable to plant my fall garden. I’ve been putting off planting indoors under grow lights, hoping for cooler weather; but I don’t think I can put it off any longer if I want a fall crop before frost. At least, I still have plants striving to live and give me what they can.

Even in the heat, my Seminole pumpkin is creating new fruit for me.

Most of my melon vines are now dead, but one rich sweetness melon vine is trying to make a comeback.

Before the rain, I took a few pictures of my most stressed plants, showing the effect of long periods of high heat without rain. The leaves aren’t healthy looking, or they fall off. They need fertilizer, too, but it’s not good to fertilize stressed plants. (The fertilizer would cause them to put forth new growth, taking energy away from the plant in its attempt to survive.)

My filius blue pepper plants look naked, but they’re still trying to give me a few peppers. 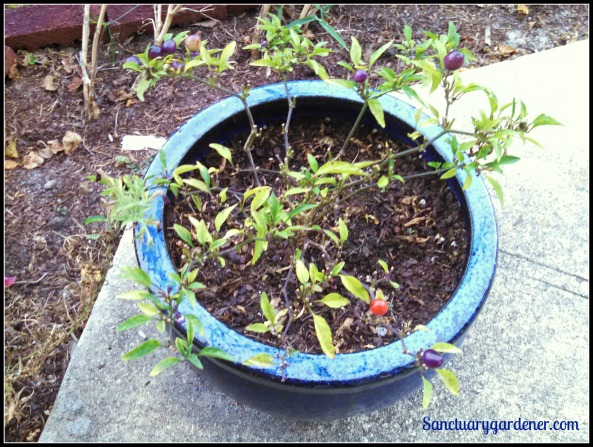 My petunias are on their last leg. But hey…they lasted longer than anyone thought they would.

Petunias dying in the heat

My chili peppers don’t look very strong and healthy. If they can only hang on a little longer – til the cooler weather comes. 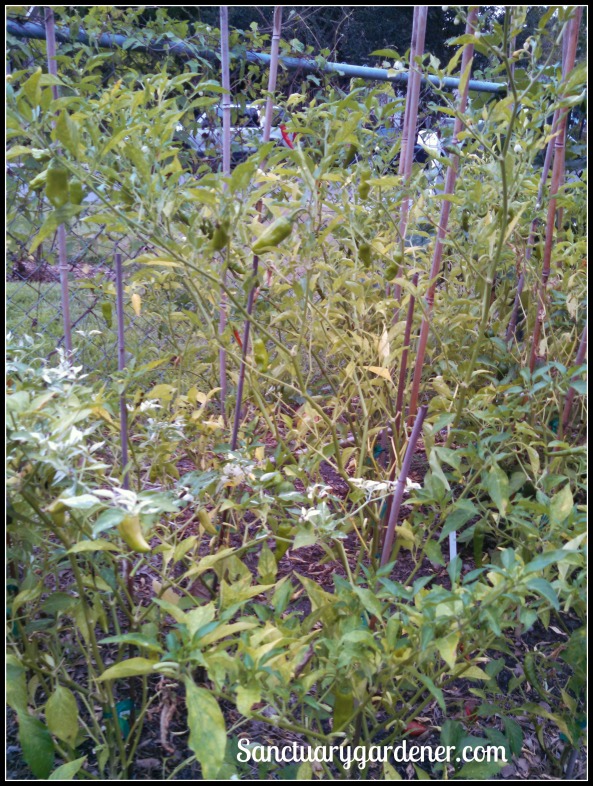 Chili peppers stressed in the heat

Well, whatever was eating my elderberries snapped the stem, leaving me with this. At least, I only have a couple flowers on my new trees, so I don’t feel I’m losing out on much. However, next year, I will be draping my trees with netting!

Now for some good news. The few key limes I do have on my one tree are growing.

My two pumpkin vines have almost taken over their corner of the garden. You can see them covering the bed they were planted in, growing towards the bottom of the picture, growing up towards the chili peppers (towards the top of the picture) on both sides, then up the fence behind the peppers! (They’re mixed in with the morning glory vines I am in the process of pulling out. Too invasive!)

Speaking of morning glories, here are flowers opened up yesterday morning. Enjoy now because I’m sorry I planted them. They self-seed so easily, I have them all over my yard as well as my fence. OY! 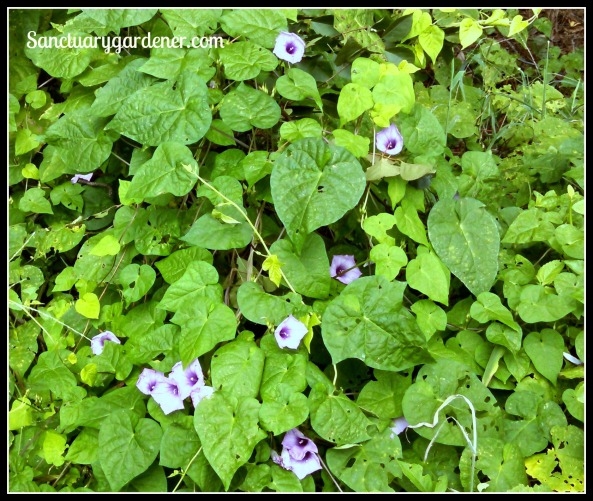 After the rain, the critters came out. Take a look at these two Carolina anoles on my fence. One is on the left of the weedy tree (yep, that’s gotta go, too), and the other is crawling towards the top on the right of it.

While trimming the morning glory vines off of my pumpkin vine, I saw a huge bumblebee fly into the pumpkin flower on the top of the fence. It was difficult getting the camera over the flower, but you can still see the bee inside.

While I was over by my eggplants, talking to my neighbor, a small dragonfly alighted on one of the stakes. He sat for the longest time, like he was staring at me. He then flew to a nearby stake and continued looking at me. I figured he was posing for a picture, so I took one. He flew off shortly after I took it. How cool is that?

Dragonfly posing for me

I sliced up my first strawberry watermelon. It wasn’t quite ripe, but the vine they were on had died. However, it was still fairly tasty. 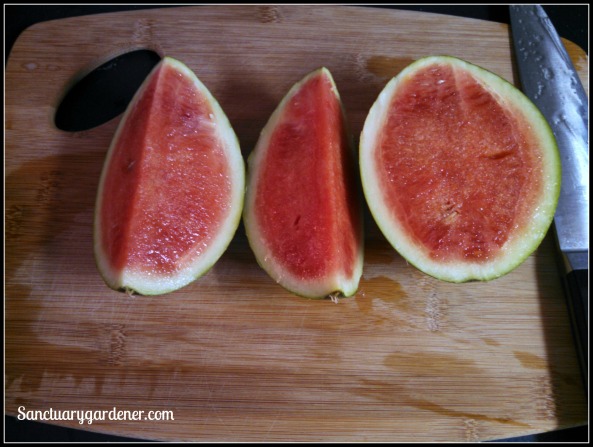 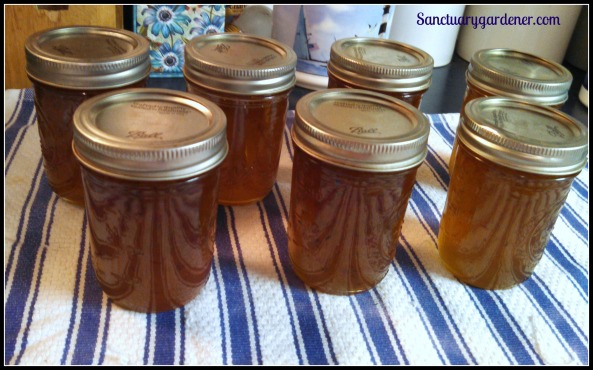 Click here to see the bounty from my “little engine that could” garden.

What’s happening in your garden and kitchen?