It’s been another week in the 90s here in my Sanctuary Garden, but we did get rain twice this week. It was heaven sent, for sure! This weekend, it was overcast in the mornings and I was actually able to spray my garden with aspirin water and baking soda water, and do some fertilizing. I also planted a bed of Dixie Speckled Butterpeas. I read they love the heat, so I figured I’d try them. All in all, my garden is doing well, considering the heat and insufficient rains.

I have peanuts growing, though the germination rate was about 20%. I did plant a month late, and it has been hot. However, I have about 14 or 15 plants, and a couple of them have their first flowers.

My greens are bolting in this heat – even the orach. 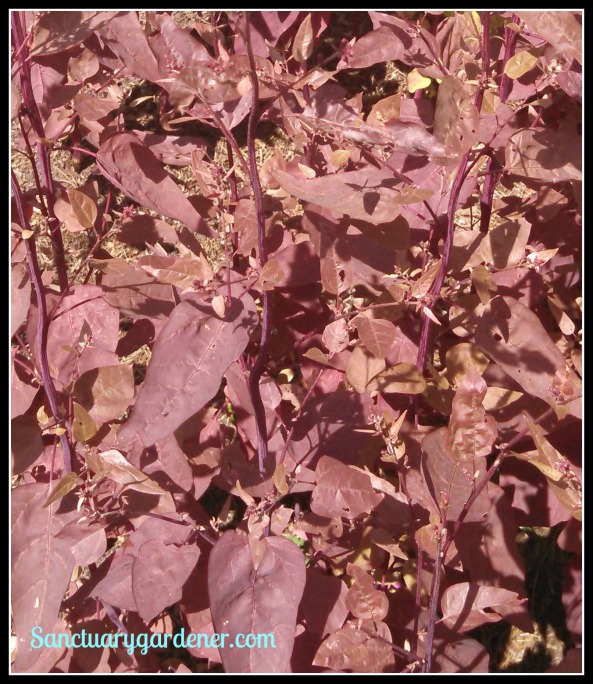 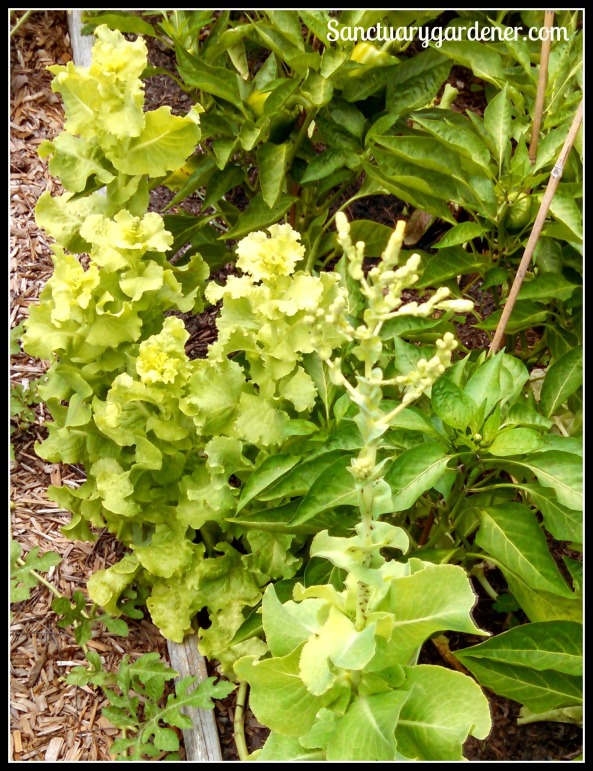 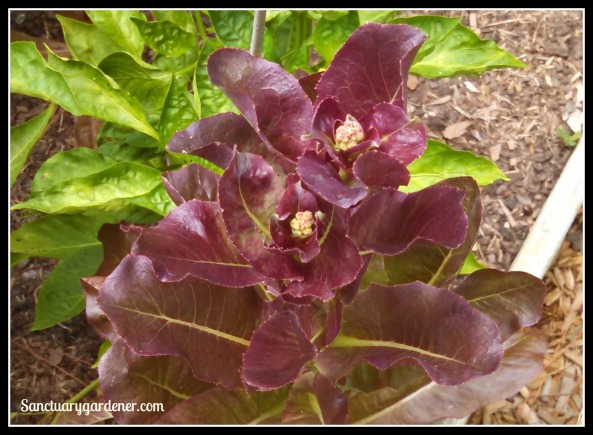 Many of my herbs are now bolting or flowering.

This oregano is now in its second year, and this is the first flower. 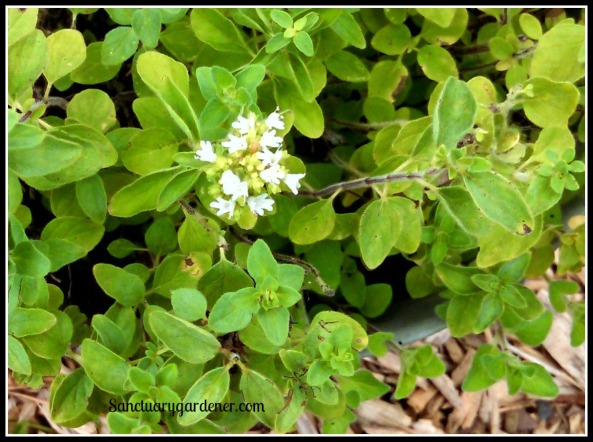 My curly parsley is also two years old, and it’s in full flower. Doesn’t it look like a dill head? It’s in the same family.

Speaking of dill, my fernleaf dill is in flower. Look at the size of this dill head! 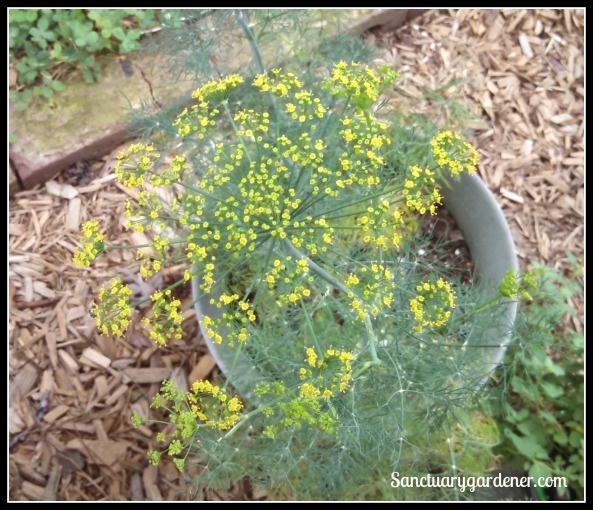 And, of course, the basil is flowering. I keep picking them off, but the heat keeps them coming.

Weeks in the 90s with rain every 10-14 days has finally taken its toll on my garden. I’m fighting it, but I’ve lost a few plants. I had to pull most of my mini yellow stuffing peppers and one of my green bell peppers because they had some disease – stunted plants with black spots on all the fruits. Into the trash they went.

I’m fighting downy mildew on my cucumbers and squash, as well. I started spraying them with baking soda water (1 Tablespoon baking soda + 1 teaspoon neem oil + 1 teaspoon horticultural soap in a gallon of non-chlorinated water). I sprayed that on my tomatoes, too. That’s supposed to lower the pH of the leaves so the fungi don’t survive. 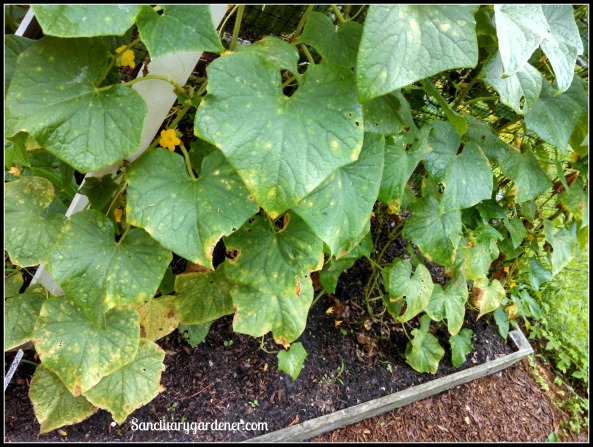 On a happier note, all my Black Futsu Squash made it through the squash vine borer attack. Not a single plant was infested! THIS is the squash for me! The one on the left of the picture is struggling with downy mildew; the one on the right has no signs of mildew. Both are growing furiously. The plant growing “up” the left side along/behind/past the pepper bed is my Seminole pumpkin. It survived the squash vine borer attack, too, and loves the heat. I have one butternut squash that is struggling to survive (front left of the picture, mixed in with the Black Futsu leaves.)

The thyme and summer savory I planted from seed is growing. 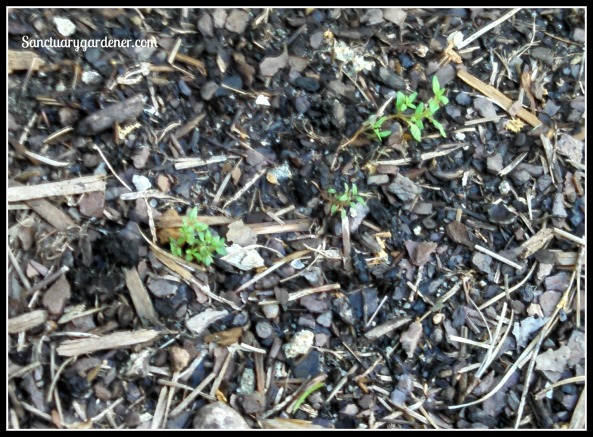 A friend of mine gave me a comfrey plant from her garden. I almost lost it a few times, but it’s finally “taken” to the transplant.

While in my garden this weekend, I saw this huge insect that I thought was a hornet or wasp. I had never seen it before and it kept flying to and from my chili pepper bed. I admit, I was totally freaked out and went inside to research what it was. It seems I was visited by a cicada killer. (Sorry the picture isn’t the best. I got as close as I dared, then cropped the picture.)

On a less creepy note, check out this funky tomato. It has a nose! 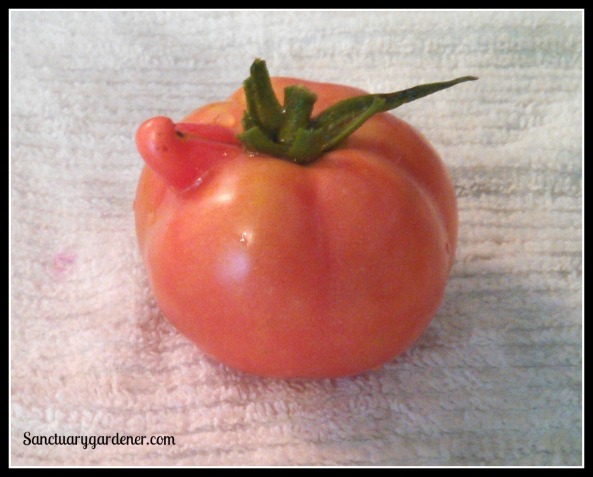 This week, I made hot pepper relish. 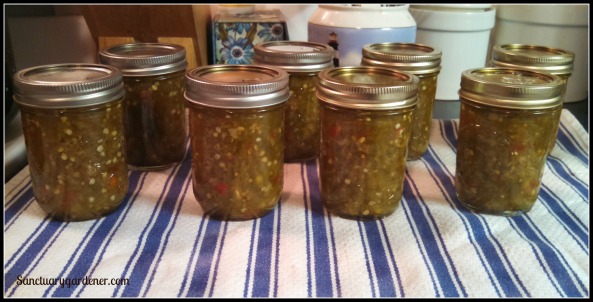 I also made a lovely Saturday night supper with marinated lamb tips, mashed purple potatoes (from my garden), and eggplant fries with this week’s harvest.

The harvests keep coming, too. Click here to see this past week’s garden bounty.

What’s happening in your garden?