I keep an organic garden, and I use organic fertilizers and compost tea. As you know, organic fertilizers can be expensive, and making compost tea for twenty-one raised beds and a mini orchard is a lot of work. So, my goal this year was to try and simplify the gardening process as well as save money. One way I’ve found is by using the Bokashi system of composting and fertilizing.

A few months ago, I read an article in Urban Farm Magazine about a different way to compost kitchen scraps using Bokashi, a Japanese word meaning “fermented organic matter.” The Bokashi product is rice bran inoculated with microorganisms that are beneficial to the soil. When used in a closed environment, it encourages anaerobic fermentation of food waste (kitchen scraps). A by-product of this process is a viscous liquid that contains a high concentration of nutrients and microorganisms that can be used like a compost tea. The remaining scraps can be put into the compost bin, pre-softened and full of microorganisms to make wonderful compost!

The article I read mentioned a company called Teraganix, which sells Bokashi products. They have a compost tea system you can order, but I thought I could save money by doing it myself. I ordered their starter system of two of five-gallon buckets with lids and a 5-pound bag of Bokashi plus two additional 5-pound bags of Bokashi (to last me the summer?).

Here’s the starter kit (buckets are inside each other):

Then I ordered two water barrel taps from Ebay to insert into my buckets. My Garden Wilson drilled 1 1/2″ holes in the buckets for the taps then sealed inside and out with silicone adhesive. Voila! Instant compost tea buckets.

These taps are wonderful! The handles turn easily and they stay tightly closed when turned off.

To start the process, I put a small container of kitchen scraps into the bucket (about a day or two’s worth), then added a half cup of Bokashi and put the lid on.

Every day, I kept layering table scraps and Bokashi until the bucket was full. When it got close to being full, I pushed the mash down, so there wouldn’t be too much empty space in the bucket. It took me about two weeks to fill one five-gallon bucket. 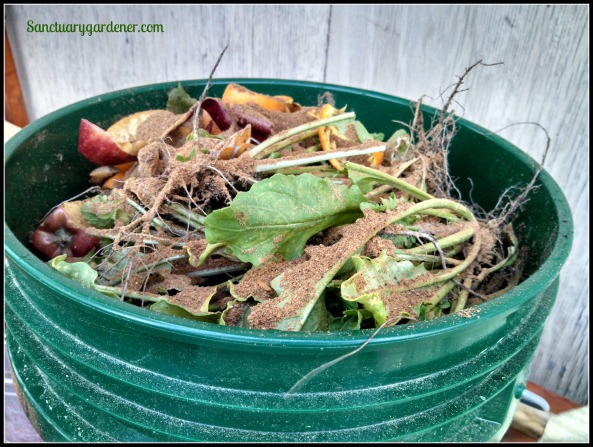 As a note, the Teraganix site said that when you open your bucket to add more scraps and Bokashi, you should not be met with a trash dump smell. If you do, then you are not using enough Bokashi. Just increase your Bokashi a little, and the smell should improve.

Once my bucket was full, I put the lid on very tight and had to keep it closed for at least two weeks. During that time, the Bokashi was fermenting the table scraps and making a great compost tea concentrate. Meanwhile, I started filling up my second bucket with scraps and Bokashi.

After about two weeks, I didn’t have much planted in my garden yet, so I let the first bucket sit for longer. I’m not sure if that had a negative impact on the microbes or not. I’m not worried about it because I’ll be on schedule with the two-week process from now on.

Yesterday, I turned the tap on my first bucket for the first time and was happy to see plenty of liquid to use as a compost tea type of fertilizer.

Teraganix recommends using 1 teaspoon of Bokashi liquid for every gallon of water as a liquid fertilizer. I have a two-gallon watering can, so I actually used 1 Tablespoon (3 teaspoons) of liquid for the two gallons of water, and I had enough liquid to fertilize all my growing plants and trees! That’s a lot!

I read on the Teraganix site today that after the two weeks of undisturbed fermentation, you can tap your buckets daily for the liquid. That’s good to know. When my second bucket is ready (it just started its two-week fermentation process), I’m going to do that and fertilize my garden in sections.

After I finished fertilizing my garden, I opened the lid on the bucket. It had a pickled sort of smell. Good fermentation. Look how much the scraps have been compacted from the fermentation process!

I then dumped the contents of the bucket into my compost bin and buried it within the pile.

These scraps will not only decompose quickly, but they also have beneficial microorganisms to add to what will become new compost.

I think this system is a win-win. In one process, I’ll get great liquid fertilizer and fermented scraps for my compost pile. I’ll have compost in less time, and I won’t have to brew compost tea every four days. I do have a season’s worth of organic fertilizer to use this summer, so the Bokashi will be used in between my fertilizer feedings. If all goes well, I’ll use the Bokashi only in my garden next year. I’ll keep everyone posted on how my garden grows. 😉

If you want more information on Bokashi and how it works, as well as all types of products available, visit the Teraganix website. It’s loaded with information!

Have you used Bokashi in your garden?