According to the calendar, it’s officially autumn. According to my surroundings and the daily high temperatures, not so much. It’s that time of year when this Yankee girl pines for all things New England. I’ve lived somewhere in the South for almost 30 years now, and I still miss having four distinct seasons. Here in the Lowcountry of South Carolina, we have only two seasons: summer and not-summer. During autumn, there isn’t much autumn color on our deciduous trees, if at all. We don’t have autumn temperatures until winter (mid-December or so). And there is definitely never any smell of impending snow in the air as autumn comes to a close! Of course, I love the length of the growing season here and the ability to grow more varieties of crops during the year; but I still miss the changing seasons, especially autumn. So, I thought I’d share with you what I love most about autumn while reminiscing my New England days gone by. (Above photo credit: commons.wikimedia.org)

One of my favorite things about a New England fall day is walking outside to a burst of autumn color on the trees. Golds, yellows, oranges, reds, and burgandies shout for attention against the green of stately fir trees. Beautiful!

I also love the crisp autumn air that smells like falling leaves and winter sun. The air changes quickly from summer to fall, prompting the semi-annual ritual of the changing of the wardrobe; summer clothes are folded and put away in the basement while the fall and winter clothes are washed and hung in the closet. I remember times of snuggling in my newly-familiar jacket while taking an autumn walk across crunching leaves, breathing in the smoky scent of neighbors’ fireplaces wafting on the pre-winter air. 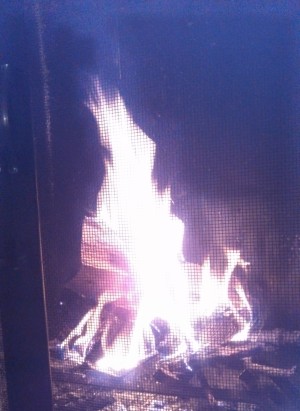 Fall fire in the fireplace

The other day, when I was discussing caterpillars (both good and bad) with a friend, I thought about the woolly-bears we used to play with when we were kids. We got a kick out of petting them and watching them curl up into brown and black discs of fur. It’s been years since I’ve seen one, and I miss those harbingers of winter. (Can you believe I actually miss seeing a caterpillar?)

I can’t think of autumn without thinking of apple picking – the quintessential New England fall activity. The fresh, ripe fruit, smiling from the trees, just beg to be eaten. When I went to the orchard, I ate one apple for every two or three I put in the bushel basket. (Don’t tell!) Not only were those apples good for fresh eating, they were delicious in home-made apple pie. But my favorite fall treat was a baked apple. Cored and filled with cinnamon, brown sugar, and a bit of butter, the baking apples permeated the kitchen with spicy aromas synonymous with fall. It was a quick treat of apple pie without the crust. 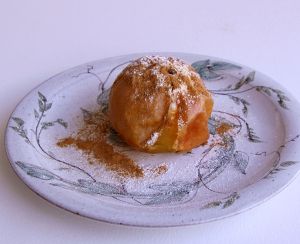 Speaking of baked apples, I haven’t had one in ages! With all this New England nostalgia, I think it’s time to pop a few in the oven.

What are some of your favorite fall memories?