It’s been an extremely busy week in the garden this week! (So busy, I haven’t had time to plant the new yellow mums I bought for the urns by my front door, so they’re still sitting in my kitchen window.) First, I planted about 200 turnips, half Purple Top and half Golden Globe. I also applied organic fertilizer to all my new crops and seeded beds. In addition to weeding and harvesting (continual garden chores), I had to water my garden every day because we’ve had less than an inch of rain in the past two weeks. (First, so much rain, now not enough. Welcome to the south.) Then, I spent time in the kitchen: drying dill and oregano, dehydrating 6 pounds of bananas and 6 pounds of apples, and making six pints of hot pepper jelly. Whew! I need to tell my boss I don’t have time to come to work. Haha. Well, I did take time to take pictures of my garden to share with you.

The peppers have definitely slowed down production due to the heat. (Yes, we’re still in the 90s every day!) But I have so many plants (two beds full) that I’m picking dozens every week. But I’m also starting to harvest cherry tomatoes again. And take a look at that fig and watermelon!

Along with my dill and oregano, I harvested my first rocoto peppers. There is Peruvian ceviche with rocoto sauce on the menu this week! 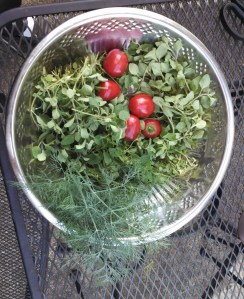 It appears my raspberry canes are gone. No fall harvest for me. 😦  I’m going to try one more thing before pulling them all up and starting again. I’ll cut down the canes to a few inches above the ground and see if any new growth appears. If nothing happens, then I’ll pull up the canes, roots and all, and replant in March. That would mean no harvest until next fall — so this last batch of raspberry preserves needs to last!

I replanted my leaf lettuce, brussel sprouts, and kale; I’m still waiting to see seedlings from the replants. I do have a couple of kale that sprouted the first time around. Here’s one of them.

I just think it’s been too hot for the fall crops to germinate and/or grow well.

I will say I’m pleased to see the beets and turnips coming up! I’ve got Early Wonder beets up and Purple Top turnips. The other variety of each should be up soon.

Remember those tomato “weeds” I wrote about? Well, I decided to let a couple grow to see what would happen. Here’s the biggest one. (I wonder if there will be time to get any tomatoes from it before frost? It’d be nice to see what kind of tomato this is.)

My cucumbers are starting to climb the trellis, so I should see flowers soon.

My key lime tree has over a dozen limes on it now, and it’s beginning to blossom again!

My winter squash and pumpkin vines are beginning to grow out of the bed, especially the Black futsu and spaghetti squash. 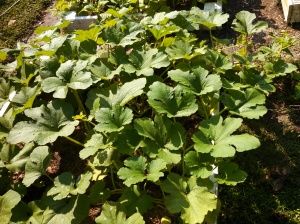 The squash & pumpkins are beginning to grow buds, too.

I harvested my last red watermelon this week; but I see flowers, so I might get some more before frost. I have three white watermelons growing. And yesterday, I discovered three lemon drop melons! (And I was going to pull those vines up because I haven’t seen any fruit in weeks.) 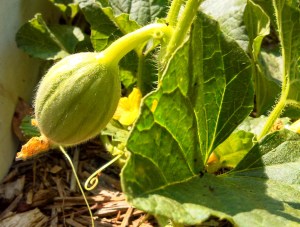 Lemon drop melons (see the newest one on the bottom)

What’s been happening in your garden this week?