Last week, I was on vacation, seeing my family in Rhode Island (thus, only three posts last week rather than five). We had a great time, and I got spoiled by the gorgeous New England weather – days in the upper 70s/lower 80s and evenings in the upper 50s/lower 60s, moderate humidity, and cool ocean breezes. What’s not to love? Then, I got back to Charleston with temperatures in the mid 90s and humidity percentages to match! Thankfully, the garden survived ten days without me. The records state we got two inches of rain, but it must’ve been right after we left because my plants were quite thirsty. Other than that, all fared well.

Before leaving, I watered everything well and put the key lime tree, which is in a terra cotta pot, into the compost pile. My “Garden Wilson” thought burying the pot in the compost would help retain moisture. He was right, and my tree survived! I also harvested everything I could and had to dehydrate a full load of hot peppers the night before we left town.

Even with that, I came home to a great harvest, too. And I’ll be dehydrating peppers again tonight. (Also, the picture doesn’t include almost 200 carrots I pulled!) 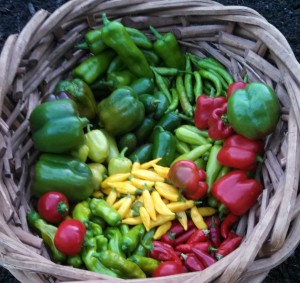 When I pulled the carrots, a few of them were chewed. That’s a first. WHAT could be chewing the bottom of my carrots?? (Anyone have any ideas?)

My moonflowers are still pretty small for this time of year, but at least I’m getting flowers – finally!! 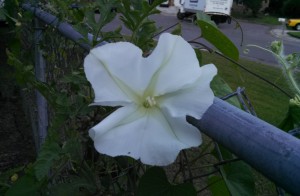 Pulling the kale around the eggplant did the trick. After four months, my eggplant plants are finally growing and flowering!

Before I left town, I transplanted my lemon drop peppers from pots into the bed with the eggplant. They were root bound and doing poorly. I’m happy to report that the transplanting has helped them. The peppers are growing new leaves, and the peppers have ripened. I did lose about two dozen unripe peppers while I was gone (on the ground around the plants), but that’s not too bad for transplant shock. I harvested about four dozen peppers from three plants this weekend.

My four red watermelons are growing, and the one on the fence is still hanging on! That’s one strong vine! 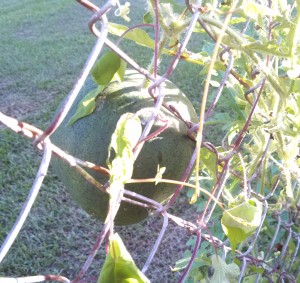 The tomatoes are starting to flower again, and I have a few new tomatoes growing. Yeah! My raspberries are flowering and ripening for the fall harvest. I’m hoping for as large a fall harvest as last year. We’ll see, considering I had such a huge spring harvest. And my figs are growing, but not yet ripening. Hmm….

All my new raised beds are now filled with loamy soil and compost. My compost bin is completely empty (though I’m now filling it with pulled/spent lima bean plants and carrot tops).

It was so hot yesterday, I couldn’t do all the planting I wanted to do. I pulled the lima beans, harvested the carrots, pulled weeds, and planted some. I planted cilantro, sweet peas, and snow peas in pots. Then I planted long green improved cucumbers and Russian pickling cucumbers along the trellis. During this week, I’ll be planting winter squash, pumpkins, brussel sprouts, kale, lima beans, snap beans, beets, carrots, and leaf lettuce. To come at month end: turnips, radishes, and buttercrunch lettuce. In September, I’ll plant spinach, with onions and garlic going in the ground in October. My eggplant, peppers, and tomatoes should last through first frost in mid to late November.

Are you preparing for fall planting? What will you be growing?