Yesterday, I posted an article about planting and caring for raspberries. Today’s post is about pruning them. After the first year, a raspberry patch can get quite thick (as you can see in my “before pruning” picture above) and will need annual pruning to keep the plants healthy, allowing good air circulation around the canes, preventing the spread of disease, and ensuring good berry production. It is important to know what canes to prune and when to prune them, which is dependent upon the variety you have.

All raspberries have biennial canes. With summer-bearing varieties, the canes grow in year one, then produce one crop in mid-summer the following year. With everbearing varieties, the canes produce in year one with their first crop in the fall, around September; in year two, the same canes will produce their second crop in the late spring, around June. Because of the differences of when canes bear fruit, it’s important to know when and how to prune, so you don’t lose any of your future crop.

WHICH RASPBERRY CANES TO PRUNE:

New raspberry cane grwoth is called a primocane and looks fresh and green, as in the picture below: 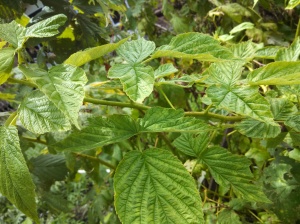 Older/prior year’s growth is called a floricane and looks barky and brown, as in the picture below: 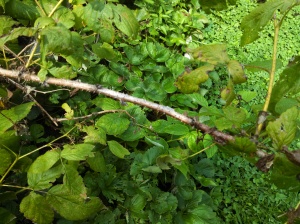 When pruning, remove the floricanes after fruiting, according to the guidelines for your variety, as show below.

WHEN TO PRUNE RASPBERRY CANES:

The timing of pruning your raspberries depends on the type of raspberry you have – summer-bearing or everbearing. No matter the timing, be sure to wear long-sleeves and thick gloves and use sharp, long-handled pruners. Raspberry canes have sharp thorns!

EVERBEARING VARIETIES (which is what I have):

Because everbearing raspberries produce twice on the same cane, you do not prune these as you would summer-bearing varieties.

BEFORE AND AFTER PHOTOS:

Last weekend, my everbearing raspberries got their first pruning. The spring harvest was over a couple of weeks ago, and I’m just starting to get flowers and small raspberries on the new growth (the fall harvest is beginning). So, my beau and I took the pruners and cut all the floricanes to the ground. We also cut out any unhealthy-looking canes.

The picture below is a closeup of one section of the bed before pruning. See how close together all the canes are? 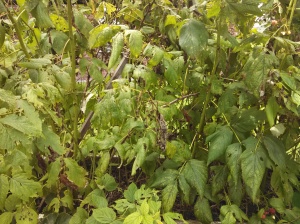 After removing the old floricanes, there is now so much more space. 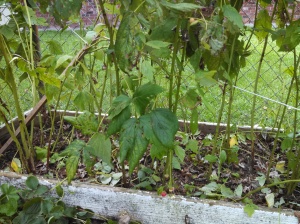 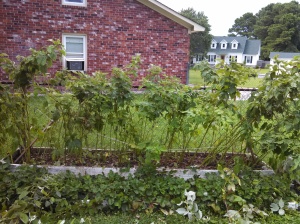 My next project is to pull out the stakes and line and replace them with a double stringing of heavy gauge wire and thicker stakes. That should hold up these heavy canes as they bear yet another crop of tasty berries for me!