One of my favorite summer delights is sliced cucumbers with olive oil and lemon juice, and nothing tastes better than a cucumber you’ve grown yourself, picked fresh off the vine. Cucumbers are extremely easy to grow and don’t take up as much space as you would think. Why not take part in growing the fourth most cultivated vegetable in the world?

Cucumbers, or Cucumis sativus, belong to the cucurbitaceae family – along with other creeping vines like squash, melons, and pumpkins. There are three main types of cucumbers: slicing, pickling, and “burpless.” Although slicing cucumbers can be pickled, pickling varieties have been bred with pickling in mind.

Cucumbers are an ancient vegetable. Records from the Chaldean city of Ur list cucumbers among common foods, and the Epic of Gilgamesh describes people eating cucumbers. India has cultivated cucumbers for over 3,000 years, and introduced them to the Greeks and Romans as their empires spread to India. The Romans enjoyed the cucumber, growing it in the equivalent to our modern greenhouse, which enabled Emperor Tiberius to eat cucumbers year round. The Romans were most likely the ones who introduced them to Europe. Records show that Charlemagne had cucumbers in his gardens in France in the early 9th century, and Christopher Columbus brought cucumbers to North America in 1492.

Cucumbers are 95% water and full of lignans that fight cancer. A half cup of sliced cucumbers (peel on) contains 11% Vitamin K, 10% Vitamin C, and 2% each manganese and magesium (based on recommended daily value).

Cucumbers can be grown in Zones 4-11 and require six to eight hours of full sun a day. They like loamy, well-drained soil with a neutral pH of 6.5-7.0. You can start cucumbers inside three weeks before transplanting, or direct sow (or transplant) two weeks after the last frost date. Cucumbers will not germinate until the soil temperature is at least 65 degrees.

Sow seeds one inch deep, six to ten inches apart. Transplant seedlings twelve inches apart. You may plant in hills (5 seeds/hill or three seedlings per hill) three feet apart, or plant in rows along a trellis. Growing cucumbers on a trellis has several benefits. It protects the fruit from problems with lying on the ground, makes cucumbers easier to harvest, and allows you to grow more cucumbers in a smaller plot. (See How to Build A Garden Trellis.)

Because cucumbers are a high water content fruit, it’s important to water them consistently. When the top inch of soil is dry (up to the first knuckle on your finger), it’s time to water. Mulching will help maintain soil moisture, as well. 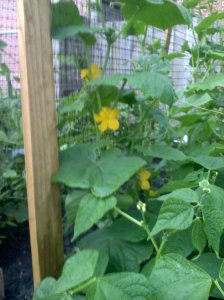 Depending on the variety, cucumbers mature in 55 – 70 days. Refer to your seed packet to see how long your variety will be at maturity, as that will help you to know when it’s ready to harvest. It’s better to pick too early than too late, as cucumbers get bitter then turn yellow when not harvested in time. Also, production decreases when harvesting is not done on a regular basis – usually every other day when at the height of the season.

Cucumbers will keep in the refrigerator for up to ten days if wrapped tightly in plastic wrap. For that bumper crop, there’s always pickling – and the recipes are endless!

FROM GARDEN TO KITCHEN:

The most popular ways to eat cucumbers are fresh  or pickled, but consider these different ways to eat this healthy veggie:

Tzatziki Sauce (great on gyros, Israeli falafel, or as a veggie dip)

Stay tuned later in the season for my own recipes for pickling….after I experiment with the harvest from my more than two dozen cucumber plants!